Well, actually that's probably untrue. That's probably my viseral response to something that is a little tedious and takes way more time than I want to in the midst of a million other things that are on my personal responsibility list.

I just kind of want the actors to move where I want them precisely and exactly. This, while staying in character and not knocking into each other or any props that we haven't introduced yet. Also, I don't want them to stand there like a deer in the headlights not knowing WHERE to go.

Is that too much to ask?

For those that don't know, blocking, in all it's forms, is someone deciding where the characters are in space...where they stand, enter, sit...how they move...what they pick up. From a directing stand-point blocking sits very heavily on the creative world building end of the spectrum. So blocking also communicates what is here in this scene, the furniture, the tools, the obstacles. These things may actually exist or not, but blocking tells the actors that they are there. For instance, if I need there to be a ridge on the stage at precisely 6 inches left of center, blocking will state that the actors trip on it EVERY time. So blocking is absolutely as necessary as script. There are as many ways to "block correctly" as there are directors putting on a show. Honestly, I personally have several methods but with my current time constraints I tend toward more organic blocking. I let the script and the actors figure it out and then write it down. That works really well for your first show when everyone is excitely looking at their script every day because it's all so new and shiney. Everyone has great ideas every rehearsal. But by the fourth show, especially the spring show, when at least one script is left ON THE FLOOR most rehearsals and a good portion of your cast doesn't open their folders until the jitters start about 2 weeks out...well, let's just say that I'm bossy for a reason.

Blocking starts with the first read-through. Then, Ms. Tammara, Ms. Abigail (my wonderful co-teacher and assistant, respectively) and I sit and read it again. And we make notes. Then we draw a basic stage sketch of what is permanently on the stage. What type of stage do we have? Is it proscenium or black box? Are we doing it in the round or as a thrust?

As the production progresses, we add the moveable set pieces like furniture and then the various props that the actors and stage hands will bring on and clear. AND we write.

Me - "oooh, that will make it so much easier to write"

Kid - "Ms. Stacey, I don't have room to write." Me - "That's why you have a pencil, so you can erase. Also, maybe shorten what you are saying...instead of "cross down right" you could say XDR"

Me - "Note-taking? You are never going to use note-taking? <derisive snort>

Yes, I do derisively snort...ask them, they'll tell you.

It's a discipline for me to sit and imagine something that doesn't exist yet. To quote the wisdom of the internet, "Ain't nobody got time fo dat".

It's a discipline to read the script over and over to find all the aspects that I missed last time (this is true for all of my leaders, adults and students) but ensures that I KNOW the story and the script and have a pretty good idea of what I'd like to see happen.

It's a discipline to take everything that I have written down and communicate it to the cast and WAIT for them to write it down. Anyone who has ever tried to get 30 people of any age to write down what they said understands this...but now make those 30 people range in age from 6-18 and throw in a couple of extra pre-writers...and then pray for me. It's a discipline for the actors to write down blocking. Many of them have never done it. They don't inherently know the short-hand. Most of them haven't taken notes long enough to understand what it means to write in or develop your own short-hand.

It's a discipline for the actors (and the Director) to look at and memorize the blocking...and more importantly, actually DO the agreed upon blocking every time. But, when I do plan and block...and then make them learn to block...it makes everything so much easier. The actors move where I want them precisely and exactly. They usually stay in character and don't knock each other over or step on any props. The actors are so much more comfortable knowing where to go. And the show works better all the way around. So yeah, I hate blocking. But I love the fruits it brings.

For the moment all discipline seems painful rather

than pleasant, but later it yields the peaceful

fruit of righteousness to those who have been trained by it.

Where it all started. 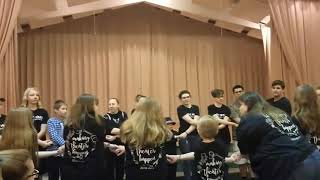